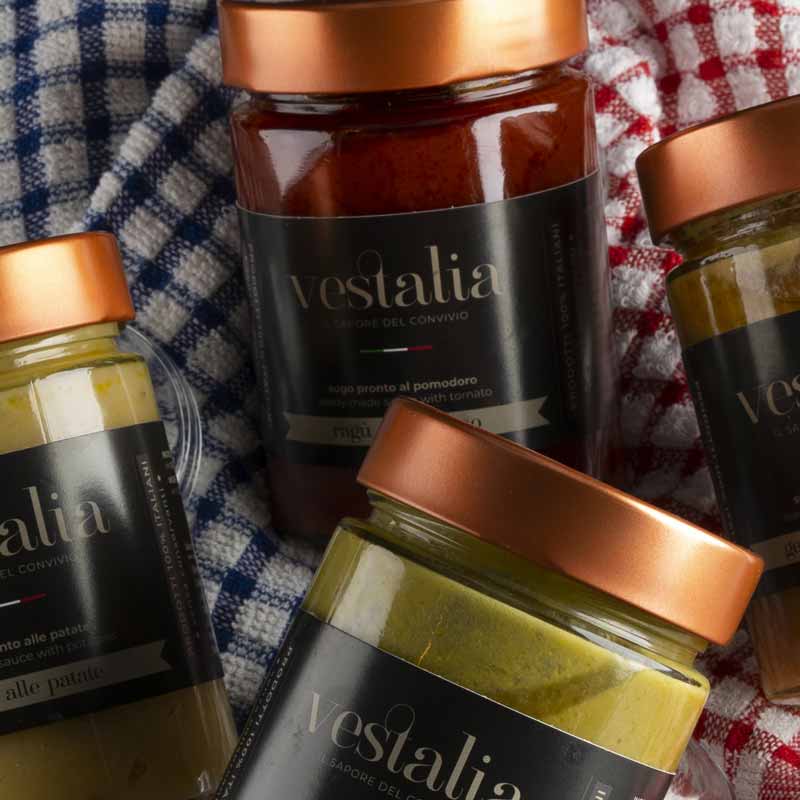 Love, competence, passion and method are mixed together to create this unique and ambitious project: Vestalia brings the taste and the simplicity of Made in Italy cuisine to your dining table.

Vestalia: story of a friendship.

Many projects and business ideas are often created almost by chance, as if it was a game. That’s how it went for Vestalia, a tasteful idea, born drinking a glass of good wine. It was 2017 and Luca, one of the two current partners, was working at a wine bar (that he himself made up from an old basement), where Roberto used to hang out a lot, and he then became Luca’s business partner. Luca and Roberto were just two young boys and they barely knew each other at the time, but they used to hang out together having some drinks after work. During one of their talks, the project took form and became what is now known as Vestalia. While drinking some good wine, everything seems to be easy to make, but the two young boys already had some clear and defined ideas and the will to succeed in that drea,, and so, day by day, one difficulty after another, they managed to turn their newborn project into something bigger and bigger. In May 2020, from the ashes left by the Pandemic, arose Vestalia, an ambitious project, as ambitious as the men who created it, who never will lose their intention to be challenged.

Keyword: “never give up”

Roberto has a Master Degree in Finance and Economy.

During the last part of his studies, he realizes that he actually wants to start working for a company and decides to challenge himself by creating one on his own, and with a good companion. He believed that the Food and Beverage field would suit him the best, although his background in this field was only amateurish, he decided to get involved in it, by studying hard and gaining more and more experience. In 2017, together with his partner, Roberto decides to build a company whose main core is a kitchen lab to produce handcrafted pasta sauces. At the beginning, the project core business was the distribution of these pasta sauces in actual direct stores. With the passing of time and with many valuations, the two business partners realise that the real future of these pasta sauces is in a jar. So, at this point, with the help of food technicians and chefs, they decide to bring “grandpa pasta sauce” right to people’s homes.

Luca has a Master Degree in Law.

During his studies, he realises that his childhood dream of becoming a lawyer was not as great as the one of starting a company. From shop assistant to waiter, and from help chef to manager of a wine bar, he gets the consciousness that what he really wants is his own company, the one he has been dreaming about with his friend Roberto. In the blink of an eye, Roberto and Luca’s enthusiasm gets realer and realer, turning into what today is Vestalia. His idea of company is based on simple, handmade things, not only for himself, but also to create new job positions and to share his ideas with his workmates. With deep sacrifice and a strong will, dreams can become reality!

Don’t stop believing in your dreams

it doesn’t matter how impossible they seem to be.